Music Review: Whippoorwill -- Good to be Around 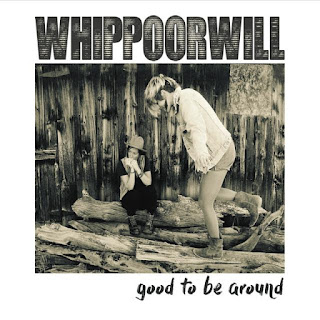 Being a native of Wyoming, even though I haven’t lived there for 30-something years, I’m still amazed at how word gets out about the things that go on with other natives. I call it the biggest small town in the world because there are so few people there, that everyone knows everyone, or at least they’ve heard your name somewhere. My familiarity with Alysia Kraft follows this story line.

Sometime in 2010 I first started hearing about a band from Wyoming called the Patti Fiasco. Some friend on some social media platform shared one of their songs, and I became an instant fan. Alysia is the driving force, songwriting, over-the-top frontwoman of that band, who is known for it’s high energy shows and hard charging music. When I first moved back to Colorado from DC, Patti Fiasco was one of the first bands I wanted to find.

So, not long after I found them Alysia made the move to Austin, Texas, splitting her time between there, Fort Collins, and the ranch in Wyoming where she grew up. Somewhere along the way she met up with singer songwriter Staci Foster and Whippoorwill was born. I heard them for the first time on KRFC when they came back west from Austin. I was immediately struck by how perfect their voices are for each other. Staci’s sweet high harmonies bring out a level of depth in Alysia’s singing that expands her vocal capabilities in wonderful new directions. There is an effortlessness to their harmonizing that would make you think they’d been singing together for a lot longer than they have.

I’m a year or so late in delivering a promised review of Whippoorwill’s debut EP, Good to be Around. That has nothing to do with the quality of this record as much as it does with my general level of overcommitment. Both Foster and Kraft are strong songwriters, showing a dedication to songcraft that isn’t readily matched by many. The six song collection was recorded at GPM Studio in Fort Collins. Production responsibilities were shared between Whippoorwill and members of the band Tallgrass; Adam and Austin Morford and Matthew Skinner.

The opening title track of the album, Good to be Around gets me moving around in my seat for want of dancing. It’s the best kind of love song, equal parts upbeat pop hooks, and intertwined melodies. Followed by the awesome shuffle of My Baby, which has so much Americana goodness, I don’t know where to begin.

Cold Blue moves us slowly into a banjo induced trance while the spacious guitar and vocals take you into a place where “your strings won’t play and your heart won’t sing”. Visions of loneliness and borderline despair don’t find any resolution. There isn’t a happy ending, but happy endings are overrated.

It’s Alright is a great showcase for Staci Foster’s writing, singing and insights into the complicated lessons of love. God knows most of us have at some point have had to assure our parents that we were going to be okay despite all appearances to the contrary. Even Cowgirls Get the Blues is a funky, train driven, rocker that would likely have an appeal to some of the recent tough girl country singers like Miranda Lambert, or even someone like Sheryl Crow.

The album ends with a plaintive, piano laden thing of beauty called Blue Eyed West. “The wild horses, they’re out there somewhere. If you believe in the blue eyed west.” There’s a cinematic quality about this song that brings to mind colorful images of deserts, mountains and glorious sunsets.

The production of this album is exceptional. Well placed layers of piano, violin, slide guitar, acoustic guitar, banjo and more make for a very enjoyable listen. Whippoorwill’s live shows are also top notch. See them soon while you can still afford the tickets. Alysia Kraft continues to do her home state proud, and if you didn’t already know that Staci was from Texas, we might be inclined to think she was a Wyoming native, too. Good to be Around makes me excited to hear more from these two.

Since the album was released, the band has expanded to include Tobias Bank on the drums. Whippoorwill is planning to tour the Western US in the next several months. Don’t miss them.