Falling All the Way 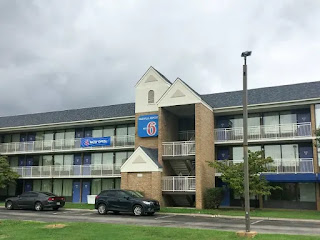 This song was written on the floor of a Motel 6 in Nashville where I was installing carpet in the Spring of 1998. There was a tornado warning that day, and the temperature was over 100F. Since the motel wasn't open yet there was no air conditioning, and if you've ever been somewhere that was waiting for tornadoes, you know how still the air can be. There was a pack of wild dogs that were running loose in the area, so we had to keep the doors locked. The only air movement was a 12 inch fan blowing hot air in through the cracked window. It was treacherous heat, worse than a sauna.

Carpet installation is by far the hardest, dirtiest, and most strenuous work I've ever done. Each roll of carpet weighs about 150 pounds, and since there were no working elevators in this particular building, all of our equipment and supplies had to be carried up stairs. The only saving grace of this building was that it was only three stories tall. For every room, there were two rolls of carpet, and one roll of pad, and then there was tack strip, tools, and a five gallon bucket of the nastiest smelling glue you've ever inhaled.

The weave underneath the carpet is a thick, wiry checkerboard that feels like really rough burlap. The dust from this material is as scratchy as it gets, with maybe the exception of fiberglass. Every time I carried a roll up the stairs, I'd get a little more of this nasty dust under my collar, and into the folds of my overalls and drenched t-shirt.

I'd come to Nashville to be a songwriter, and when I'd arrived a year earlier, I'd had some good work lined up as a business consultant. I had some sense of security and a big dream. Within six months my savings was gone, my work had dried up, and this labor was the best I could find to keep the rent paid and $40 a week for food and gas. It was the lowest of many lows, and this day was the nadir.

The boss left for a while, and nearly as soon as he was gone, I began to heave with uncontrollable sobs. This couldn't be how things ended. I lashed out at myself, and pretty near every god and goddess I could think of, all the while kicking the carpet hammer with my knee until I started to feel a good bruise taking shape. I was spent.

I found a pencil and a scrap of paper and started to write:

My legs hurt from walking
Dust burns my eyes, tears form
I think I'll lie down by the road
And sleep through the coming storm
I've nowhere to go
No one to cling to at night
Who will tend my sickness?
See me through to the daylight?

No one is safe here
No one secure
Anything can happen, anytime
Try to keep the dogs away and deadbolt the door
And do everything you can to keep from falling
All the way

Looking back, I've often wondered if reaching this low point was necessary to get me to let go of my own desire to control my life's direction, and make way for an unknown possibility to emerge. I can't say that I'd have made the move to Washington, DC a few months later if I hadn't gotten to this place - this dirty, nasty place. If you'd have told me that day that I'd be moving anywhere, I would have laughed. Here I was after all, suffering for my art, and living the dream. But in a strange, metaphysical way, in DC every door opened and I went in, leaving my Nashville dream on the floor of the Motel 6.